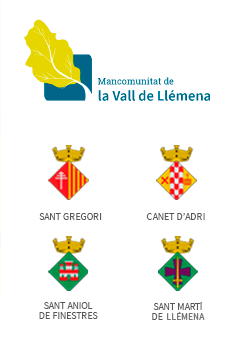 Guillem Galceran II de Cartellà (Vall d’Hostoles, 1230-1305)
The lineage Cartellà was one of the lineages leading in the lands of Girona during the Middle Ages. Guillem Galceran of Cartellà II was lord of the castles of Hostoles,Rocacorba, Cartellà, Falgons and Creixell and Pontós.
His military talents make him a faithful adviser for the Catalan-Aragon Crown and a great commander of the Catalan forces during the battles and conquests of this period. He provided great services to four counts-Kings: Jaume I, Pere II, Alfons II and Jaume II, as well as Frederic, king of Sicily.
In 1297 he was appointed governor of Calabria and Count of Catanzaro. After the Peace of Caltabellotta in 1302 and the recognition of King Frederic of Sicily, he returned to Catalonia.
Pere Joan Sala (Granollers de Rocacorba~1440/1445- Barcelona 1485)
The documentation for the biography of Pere Joan Sala is scarce,  because  many of the documents, in rural areas, hardly have reached our days.
According to the writer Albert Parareda, Pere Joan Sala probably born between 1440-1445 in the Llémena Valley, and It's believed that he was the son of peasants from a farm remença at Granollers de Rocacorba.
Pere Joan Sala was one of the lieutenants of Verntallat Francis, leader of the remença revolution in the Girona's regions, who played a key role in defending the siege of Girona in 1462, during the Civil War between King John II and the Government.
If Verntallat Francis led the first  remença war, between 1462 and 1472, Pere Joan Sala commanded the second war against aristocratic abuse, which began in 1484.
The second remença war lasted five months. After launching several attacks in different cities of Girona, Vic , the Empordà and Selva, Pere Joan Sala advanced with a group of 400 farmers to Barcelona.
On 24 March - 1485, Pere Joan Sala and his men were defeated by the army of the city of Barcelona in Llerona. Imprisoned and tortured in Barcelona, Pere Joan Sala died brutally executed on March 28 -1485, without trial and defense.
The second remença's war represented a turning point for the involvement of the monarchy in the remença problem. In 1486 King Ferran II managed the resolution of the war between lords and peasants. This ruling ended a conflict that, according to Joaquim Camps and Arboix, was the the first organized uprising of peasants who managed the abolition of feudal servitude and abuse in Europe.

Gràcies per inscriure't a la nostra llista
This website uses proprietary and third-party cookies to improve the browsing experience as well as for analysis. By continuing browsing, we understand that you agree the use of cookies

A cookie is a small file stored on the user's computer that allows us to recognize it. The set of cookies help us improve the quality of our website, allowing us to monitor which pages are useful to the website users or and which are not.

Cookies are essential for the operation of the Internet, providing innumerable advantages in the provision of interactive services, providing us with the navigation and usability of our website. Please note that cookies can not harm your computer and, if enabled, they help us identify and resolve errors.

What kind of cookies are used in this site?

Propietary cookies: those that are sent to the user's computer from a computer or domain managed by the publisher and from which provides the service requested by the user.

Third party cookies:those that are sent to the user's computer from a computer or domain not managed by the publisher but by another entity that analyzes the data collected. .

Persisting cookies: a type of cookie in which data are still stored in the terminal and can be accessed and processed by the cookie's responsible.

Analytics cookies: using web analytics to get information on the number of users accessing the site, number of pages viewed, and repetition frequency of visits, the duration, the browser used, operator who provides the service, the language used by the terminal or the city to which is assigned the IP address. Information that allows a better and more appropriate service by this website.

We assume that you accept cookies. However, you can restrict, block or erase cookies from this site or any page from the browser settings.

Next you can find the main browsers help pages: